Find a Rep
The store will not work correctly in the case when cookies are disabled.
Menu 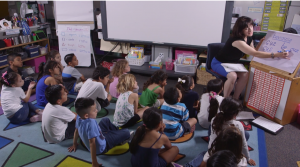 Before this shared reading kindergarten video begins, Debra has students draw and write a response to the book: write about a pet you think is best. After collecting the students’ writing, Debra examined their writing to determine an appropriate teaching focus on word study.

Most students had numerous sight words and many used spacing, capitals, and punctuation correctly. For unknown words, they tended to invent spellings, sometimes spelling the same word differently. There were a number of words that were on word walls and other resources in the room but these resources weren’t being utilized.

Debra determined that the word study focus would be to encourage students to ask themselves, “Does the word look right?” after they write a word. Several children had or could have used the word “because” in their writing. So this became the example word for their new strategy.

The shared reading kindergarten lesson begins by acknowledging students’ attempts at spelling the word and the parts they got right. Then Debra introduces the word “because”, written as it would be “seen in a book”. She introduces the strategy of asking yourself “does it look right?” after you write a word.

Are you passionate about literacy ?

Click here to learn the benefits of creating a free login.
Hear from literacy's leading voices and get classroom tools and more.